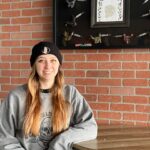 Ever since being a child Megan has been interested in art.  Initially she started drawing and sketching characters from television shows she watched.  She  decided to get serious her senior year of high school and began taking formal art classes.    Initially in high school, then in college as she continued her interest passion.  Megan  expanded her skills in college with figure drawing and digital courses.  Looking for inspiration how to apply her craft, it became evident when she received her first tattoo.  After receiving several of her own tattoos while building a relationship with her artist, Megan was hooked.   Megan is focused on neo-traditional and anime tattoo styles.  Megan works in both Black & Grey and Color.   Her goal is to deliver extraordinary tattoos, develop a loyal clientele  of repeat customers, and become a top tattoo artist.   Deaf Dog Ink Stl is excited to have Megan on the team and look forward to many great years to come.